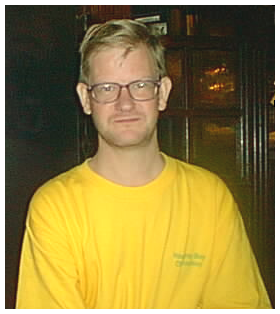 The Naughty Boys of Finchley would like to commemorate the life of John "Cider John", "John the Scientist" Schmitt. John was one of the founder members of the Naughty Boys, and a co-instigator of this website. Tragically, John took his own life on 21st January 2007, after suffering for a long period from bipolar disorder.

Both the Naughty Boys and the wider community of North Finchley are diminished by his departure, and our thoughts are with his family.

John was active in fundraising for the North London Hospice, and anyone who would like to give a donation in his memory is welcome to do so either at the Malt and Hops or the Elephant Inn in North Finchley, or by following the instructions at the website of the Hospice.